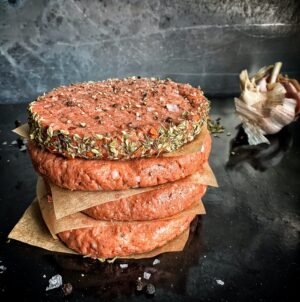 It’s believed that the modern hamburger can be traced all the way back to ancient civilizations such as Egypt. The Egyptians would prepare a ground meat that was formed into patties and spiced with various spices.

Genghis Khan Mongol army also ate patties of ground meat. However, their patties were placed under the saddles of their horses so when they rode the friction between the horse and the saddle would tenderize the meat. They then consumed the end product raw.

Eventually, the ground meat of the Mongolian army made it to Russia where it was transformed into Steak Tartare – a raw beef delicacy. During the 16th century, Steak Tartare would travel from Russia to Germany via trade routes from a Russian port to the port of Hamburg, Germany. And it’s there where it really began to transform itself into the dish we all know and love today.

Hamburg Steaks, as they now were called became popular among German sailors. These Hamburg Steaks were then introduced to the U.S by German immigrants that migrated there during the 18th and 19th centuries. From there it transformed into the American hamburger.